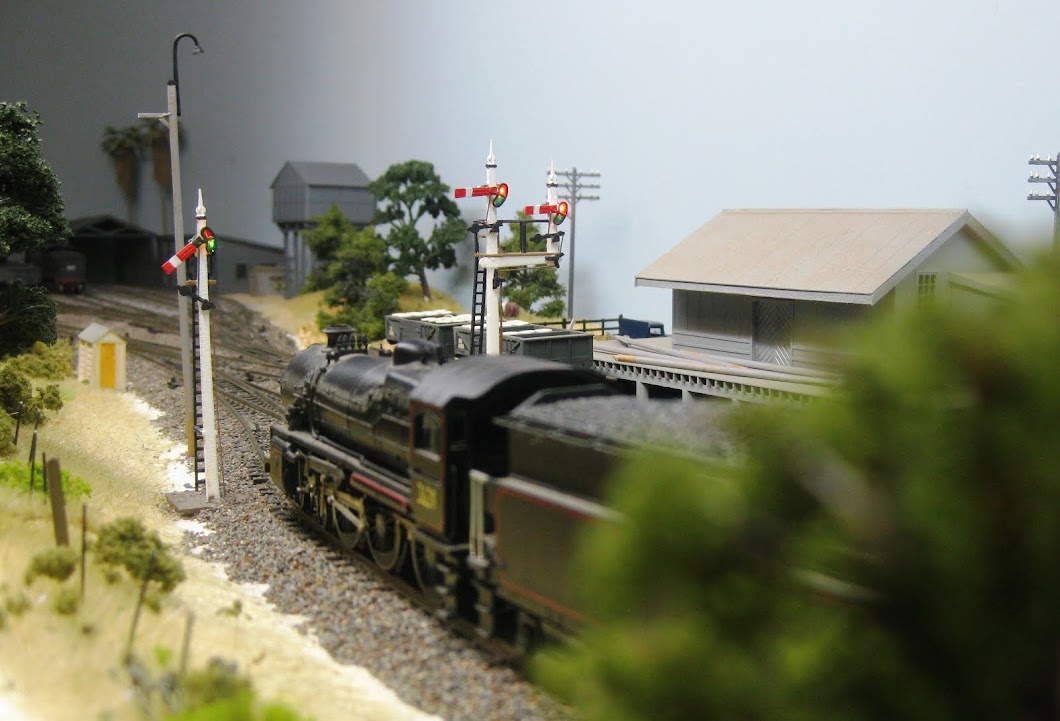 The Prototype did Everything.

Each year I do a Presentation for the SCMRA Epping Seminar, here in Sydney. This year, I described how I came to model the NSWGR's Main North in the mid 1960s, titled “The Prototype did Everything”, editing the P/Point presentation for this Blog entry.

In the early 1990s, with my young son Matt, we’re modelling NSW in the steam to diesel transition period with a 3 oval layout in a spare bedroom downstairs. As I wanted a "location" to model, I called it Broadmeadow. I wanted to expand the layout but I’d have to head out into the adjacent double car garage where I had my ski boat and the Boss parked her car. How was I going to lay extra track with them in the way? It seemed like a mountain too high to climb, so initially that idea was knocked on the head.

Getting back into the hobby, I was purchasing AMRM, Byways of Steam, Roundhouse etc. In Byways of Steam 3, Ray Love described the rear end banking of steam hauled trains around Ardglen NSW. I immediately thought that banking operation would be fantastic to replicate if I had somewhere to do it.  In the Oct 81 Roundhouse Robert Booth also described banking around Ardglen. Once again, I’m thinking the layout needs extending.

If I was to extend the layout, I wanted to have the following:

Now I was on a mission to get around the car and boat in the garage. Instead of this being a hinderance, this set the destiny of my layout. I drew many track plans dodging the car and boat, following the walls, using 2 peninsulas and without a Helix, climbing to a second deck, 400 mm above Broadmeadow in the Train room.

If I called this second deck area Werris Creek, then my 40-metre climb from Broadmeadow would be the “Main North” providing my “long main line running” and the crossing of the Liverpool Ranges at Ardglen that was the mecca for “Rear End Banking” of steam trains as they negotiated the 1 in 40 grades in both directions. Including Muswellbrook on my Main North, I’d have Lots of Garratts.

The second deck area was named Werris Creek and my “Main North” was conceived.

Now to make the rough 2 D track plan, work in 3 D. Heading out into the garage from Broadmeadow (not shown in the track plan below, that's directly under Werris Ck), following the wall and crossing half of the garage door’s opening to the first peninsula for Muswellbrook and Murrurundi at 1470 mm to clear the unmovable car.

From Murrurundi across the garage door, along the wall above my Workbench then along the rear wall to second peninsula above the boat for Ardglen at 1650 mm that also provided a “comfortable” Duck Under that was necessary here on the way to Willow Tree and Werris Ck. Note: There is a 300 mm difference in the floor levels for the garage and the train room.

From Werris Ck, I ran out to garage onto the peninsula above the boat for Gunnedah (behind Ardglen) and the Black Jack Coal Mine. I added a Return Loop for easy turning of trains. 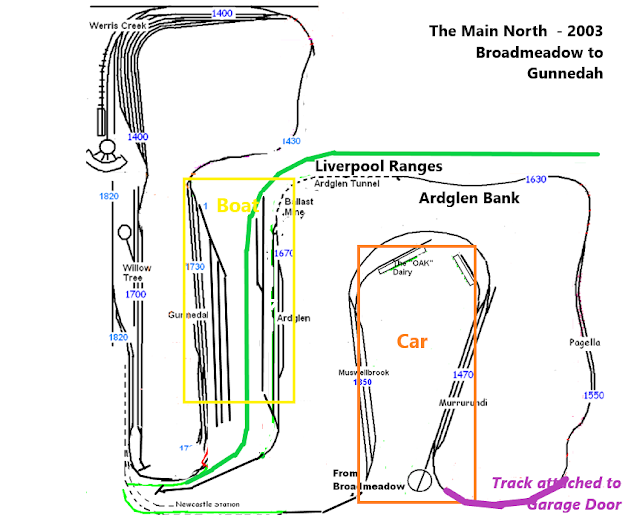 For the banking across the Liverpool Ranges, 50, 53 & 55 Standard Goods locos were used and based at Murrurundi, I needed to model Murrurundi Loco, before it closed in September 1965, setting the era of my Main North to 1965.

For a video that I did for last year's cancelled Seminar of Rear End Banking of a 36 hauled Down goods train from Murrurundi that was one of the three "must have" requirements when I initially extended my layout, with 2 Operators on my April 2020 Main North, click on the video below.

It’s 2005 and Eureka Models was making it possible for me to have plenty of Garratts on my Main North but my Muswellbrook Mine was too small. I needed a larger Mine.

The Overhead wiring reached Gosford in late 1959 and most trains to/from Sydney were hauled by the 46 Class Electrics and I wanted to model this “changeover”. Heavy Goods trains travelling north and south from/to Gosford, regularly used Garratts. Along with the increasing coal traffic south of Newcastle, the Broadmeadow to Gosford section became known as "Garratt Heaven". I wanted to have my own Garratt Heaven. I need to go to Gosford.

I’ll move the boat outside & I could work with the Boss still parking in my layout – well sort of & I did for some time. As you can see below it was a tight squeeze. 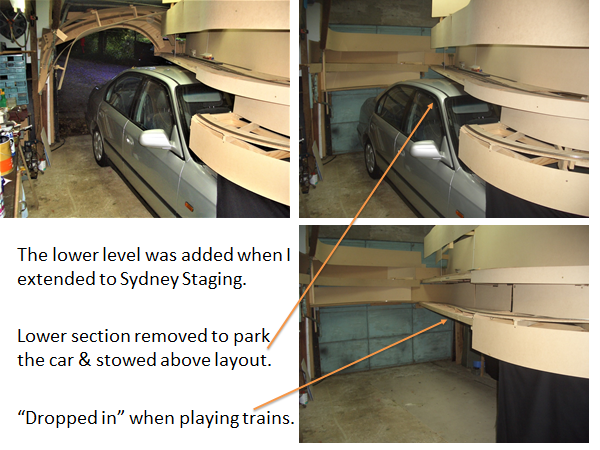 At Broadmeadow, I crossed the train room entrance, through a hole in the wall (Tickhole Tunnel) then onto a peninsula that replaced the boat in the garage. One side, Sulphide Junction & the other, Fassifern Bank with Newstan Mine between the ‘Bank & the backboard. Fassifern on the rear wall, then onto a 2 track shelf for Gosford, above the garage workbench.

Utopia! No Eureka, I certainly would be in Garratt Heaven, with help from Ron.

We needed some renovations. The Boss had been asking for a new kitchen since we moved here in 1990 & it’s 2014. Matt’s now 27 & a Builder living in Melbourne. He did the renos including a 10 x 7m Shed & Car Port. The Boss doesn’t park her car in my layout anymore and the garage door’s been replaced with a stud wall.

With the Workbench in the new shed, my 2 track Gosford was replaced with a severely compressed 4.8 m x .9 m Gosford, with the Electric Car and Garratt Sidings, see below. 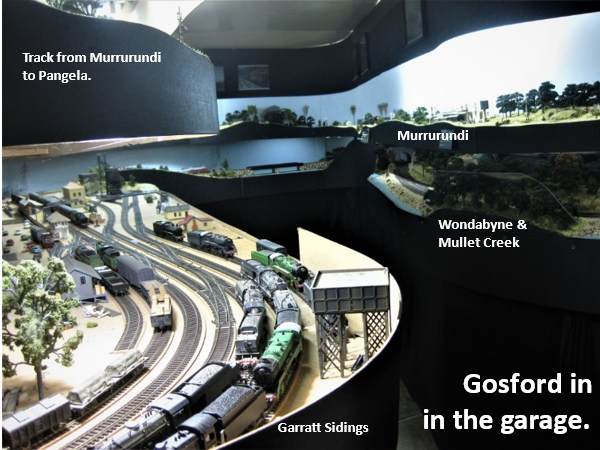 Extending the layout, I took over an 11' x 6' area adjacent to Gosford and added Ourimbah on the lower deck that improved the the entry into Gosford with a much longer UP Refuge and allowed the Garratt Sidings to curve around the peninsula.

Pangela was added on the upper deck in this above area, providing a Crossing Loop complete with Semaphores and Occupancy detection for better bi-directional operation, increasing this Murrurundi to Ardglen section to 25 metres and more fun for the 2 Operators, rear end banking a train, up the Bank.

For a longer run for the Main North's passenger train, the Glen Innes Mail, the Brisbane Express via Wallangara and the 4 Car DEB set Northern Tablelands Express, I swapped around the tracks at Werris Ck Station making the rear road going to North West Staging with the front road going further north. I renamed Gunnedah to now be Tamworth and added Armidale Staging for more storage, above Newcastle Station accessed from Tamworth via a 90 degree Crossing on the track between Ardglen and Willow Tree at the Duck Under. 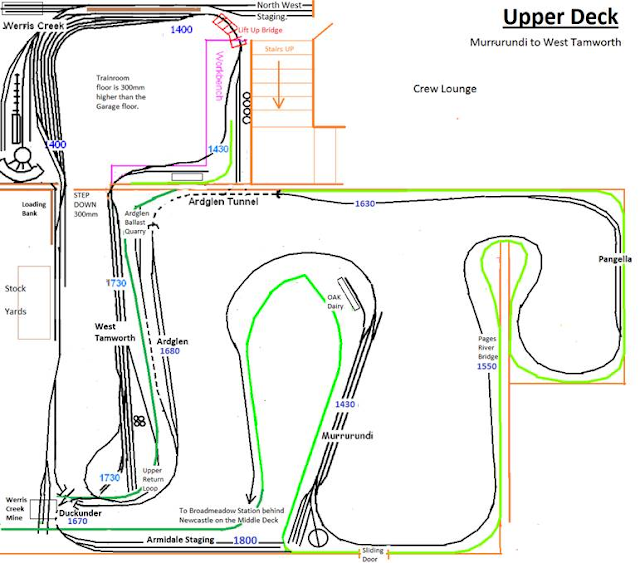 South of Gosford across The Broadwater, I fitted the Gosford Racecourse Siding and made a permanent lower deck peninsular with Wondabyne, Mullet Creek and Tunnel on one side with a 2.3 metre 3 span Hawkesbury River Bridge, on the other. This iconic Bridge looked hemmed in under Muswellbrook, it needed it's own space. Since I had my "Garratt Heaven" south of Broadmeadow, I replaced Muswellbrook with a single line against the back board and the lucky people of Murrurundi, got the OAK Dairy.
Out of Long Island Tunnel, across the Causeway into Hawkesbury River Station, then up Cowan Bank into Sydney Staging with a Return Loop, 100 mms under Broadmeadow allowing for easy turning of trains and continuous running if necessary. 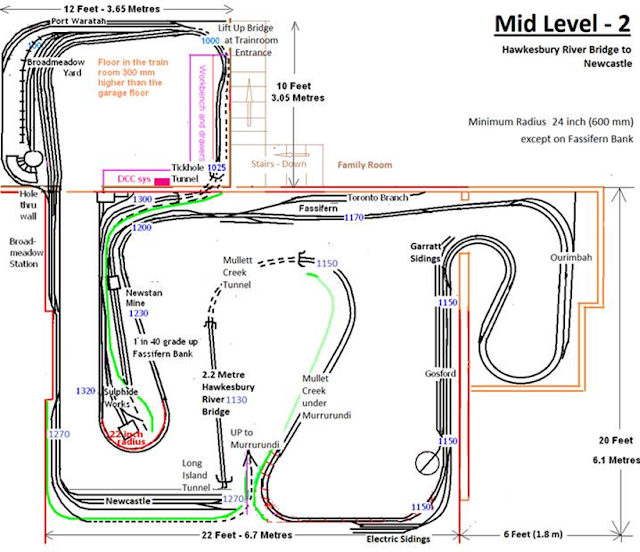 After 30+ years of fun, the shape and locations of the layout has been finalized but with miles of ballasting and plenty of detail to be added, there’s still plenty to do on my Main North that'll take another 30 years, so I don't have to worry about dismantling this railway.

Discussing our renovations with some friends, the Boss said: "She had to “make” a builder to get her renovations" but we know that’s not true, "The Prototype did Everything".

For a YouTube video of the whole layout in 2018, click here.
Posted by Marcus Ammann at 4:57 AM 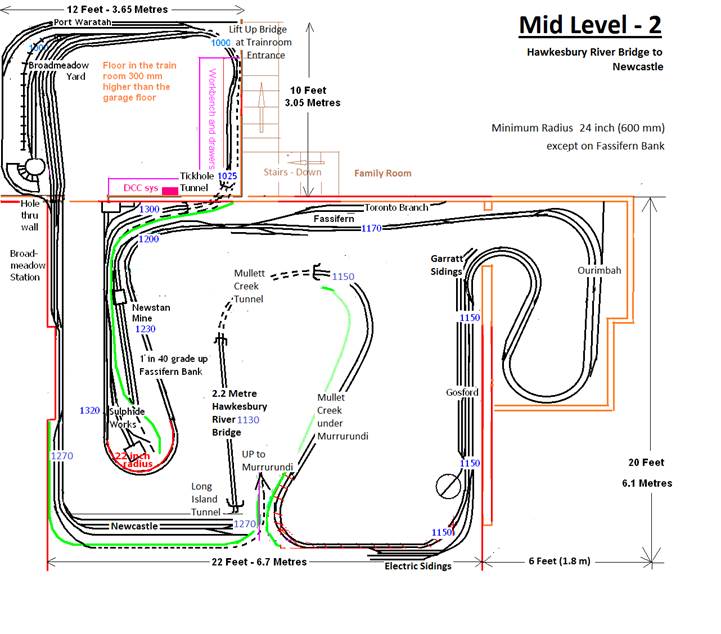